Archéo-Nil team would like to pay tribute to Mrs Evelyne Faivre-Martin, former vice-president of the society, by bringing together her colleagues and students. This study day at the École du Louvre will be devoted to the transmission of knowledge in Egyptology, and more particularly to questions relating to iconography and the History of Art.

Evelyne Faivre-Martin was a very committed and active member of the board of Archéo-Nil since 2007 (secretary, then vice-president); national museums lecturer (“conférencière des musées nationaux”), she has been teaching at the École du Louvre for 30 years and has inspired several generations of students and scholars. This tribute day will be open to the general public, subject to prior registration.

Archéo-Nil actively participates in the organisation of the international conferences "Egypt at its Origins", bringing together all researchers working on the origins of Egypt every three years (Krakow 2002, Toulouse 2005, London 2008, New York 2011, Cairo 2014, Vienna 2017). Beatrix Midant-Reynes, honorary president, and Yann Tristant, president of the association, are regularly present in the organising committee and the scientific committee of the event.

The seventh Origins7 conference, organised by Yann Tristant, was  originally scheduled to be held at the Institut National d'Histoire de l'Art (INHA) in Paris in September 2020. However, due to the COVID-19 pandemic, it has been postponed to September 2022

To celebrate its 30 years, Archéo-Nil organised a study day in September 2021, punctuated by conferences, favouring the intervention of young researchers.

This unprecedented event combined short communications devoted to current research on Egyptian prehistory and protohistory, in the conference room, and workshops organised in small groups and around original objects from the display cases in the museum’s galleries. The various interventions were led by young specialists in the discipline.

In June 2010, on the occasion of its twenty years of activities, Archéo-Nil proposed two study days held at the Collège de France and the Académie des Inscriptions et Belles Lettres - Institut de France in Paris, entitled: "Archéo-Nil 1990-2010: 20 years of predynastic research". The papers presented by archaeologists, prehistorians, Egyptologists and others involved in the discipline provided an overview of recent years of research on the subject of Predynastic and Early Dynastic Egypt.

For an overview of the communications of these two study days, see the last two pages of the Revue caribéenne i-Medjet 5 (2010)

And to (re)plunge into the heart of these days, (re)read the anniversary issue of the Archéo-Nil journal (20, 2010). 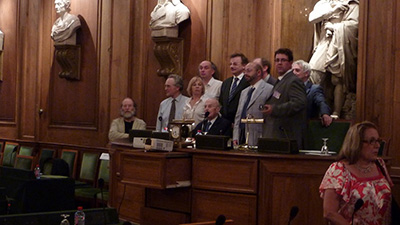 By joining Archéo-Nil, you will receive:

- invitations to the conferences offered by Archéo-Nil

- the annual issue of Archéo-Nil journal in paper format